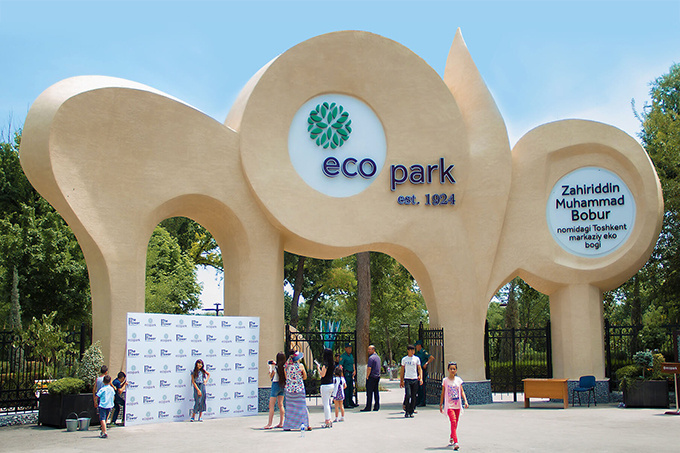 On June 10, 2017, the Babur Central Ecopark was opened. It is located on the site of the old zoo at the intersection of Abdulla Kadiri and Makhtumkuli streets. progress Street.).

​On an area of 12 hectares, in addition to shady alleys and lawns, there is a place for running and cycling paths, two tennis courts, playgrounds for mini-football, badminton, beach volleyball, there are also workout equipment and a terrace for yoga classes. ​There are no attractions in the ecopark, but wooden playgrounds and a rope park are built for children.
​You can get to the park through two entrances — from the side of the C-1 residential area or from the side of Makhtumkuli Street. There are small parking lots on both sides.
​
​The reconstruction of the old fountain transformed the park into its new format. The design in the form of a metal band, on which you can see oriental patterns, looks fresh and original.
​
​In the center of the park, its highlight is a small island surrounded by a lake. According to the idea of the authors of the project, this piece of space is ideal for wedding photo shoots and festive events. On the opening day, the island served as a stage for performances of Uzbek pop stars.
​A small pier is built on the shore of the reservoir. Soon there will be gondolas for walking on the water.

​So far, the ecopark has two cafes-one on the pier near the pond, the other near the playground. They offer ice cream, coffee, snacks, cakes, in a word, those delicious moments of walking in the park that make a trip to nature even more pleasant.
​
​Here you can relax, do sports, arrange a family walk, take a lot of photos. So far, the park has not fully adopted its own, declared by the designers, appearance. It is expected that all work on the creation of the ecopark will be completed in early autumn.
​Recall that its construction began in January 2017 by order of the Tashkent Khokimiyat. Initially, the opening of the Central Ecopark was planned for Nowruz